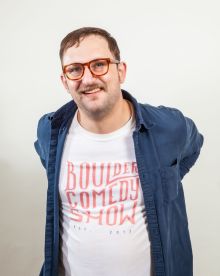 Known cool guy, Max Fine, is a comedian from Atlanta, GA, currently accepting mail in Brooklyn, New York. Highly praised for his colorful storytelling, Max taps into his own personal experiences for laughs.  He performs in clubs all over the country and bars in New York City. He has never taken acid but probably won’t say no if you offer it.  In addition to standup, Max co-hosts the podcast, In The Minivan, with his best friend and ex-roommate, Michael Rowland.